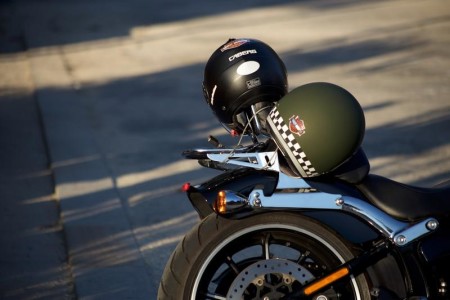 When motorcycle racing first became popular in the early 1900s, head safety was hardly on the radar. Although bikers wore leather caps to keep their hair out of their faces, it wasn't until 1914 that a basic helmet was created by Dr. Eric Gardner. After helmets became commonly worn, race medics realized that concussions were essentially eradicated.

In 1935, T. E. Lawrence, also known as Lawrence of Arabia, died after riding down a country lane without a helmet. Although at this time motorcycle helmets were only commonly used for dirt bike racing, the neurosurgeon who tried to save Lawrence, Dr. Hugh Cairns, became an outspoken voice for compulsory helmet laws. Six years later, the British Army made it compulsory for their dispatch riders to wear helmets. Over the next few decades, many states in the U.S. began to issue their own compulsory laws about cyclists' helmets.

In 1953, Roy Richter, a former race car driver, founded Bell Helmets. The company used a fiberglass outer shell, impact-absorbing foam, and a padded inner comfort liner that many companies still model their helmets after to this day. From casual bikers to Evil Knievel himself, many bikers began opting for full-face helmets to protect themselves against even the most daring of falls.

Today, biking helmets continue to change and grow, improving in both safety and style. For example, Heads-Up Display motorcycle helmets allow riders to take calls, view riding data like road maps or weather updates, and even see behind them with a rear-mounted camera.

Although helmets are a crucial part of biking history and safety, they're not the only piece of the puzzle. Bikes should be regularly serviced and updated to remain road-safe. If you're interested in updating your helmet or bike or would like to view our inventory, call Tecumseh Harley-Davidson at 517.423-3333 today.