Home › Blog › What Is a Harley-Davidson Softail? 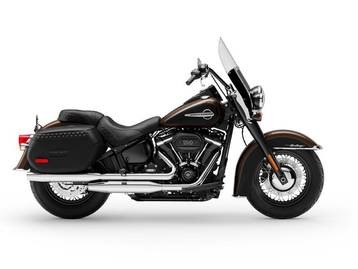 What Does ‘Softail’ Refer to?

Traditionally, motorcycle frames were a single piece. Shock absorbers in the fork reduced the impact on the front wheel but did little to cushion the rider from bumps under the back wheel. A Softail splits the frame into two pieces, with the triangular rear portion of the frame connecting to the front at a pivot point underneath the seat. The shock absorbers are hidden under the engine, giving the bike the same lines and look of a hardtail but with the added suspension.

What Is the History of Softail Motorcycles?

The Softail is the brainchild of Bill Davis, an avid rider and engineer based in St. Louis, Missouri. Davis developed his initial design in the 1970s, looking for something that would be more comfortable on long rides than what was currently on the market. In 1982, Davis sold the patent to Harley-Davidson® who introduced the new design to the world in the form of the 1984 Harley-Davidson FXST Softail®.

What Are the Benefits of a Softail?

The main benefit of the Softail motorcycle is the improved ride. The rear shock absorber means the rider doesn’t bear as much of the impact of bumps in the road. This makes Softail motorcycles a great choice for long-distance rides. Also, the Softail is the most popular type of motorcycle worldwide for customization. Many aftermarket parts and accessories are specifically made for the Harley-Davidson Softail® line, giving riders the freedom to change the look of wheels, fenders, and other components.

If you’re in the market for a new motorcycle, whether it’s a Softail for cruising the backroads all day or an old-school hardtail, Tecumseh Harley-Davidson® has you covered. And with our easy financing, you can get on the motorcycle you want sooner than you think. Check out our showroom gallery to view all our bikes.